Close by Ovingham in the Tyne Valley there are numerous attractive towns and villages with Saxon and Medieval churches and other buildings of interest that are well worth a visit. Many were partly constructed with stone taken from the Roman Wall. Inside St Andrew’s Church at Corbridge there is a reconstructed Roman arch at the base of the tower. Standing beside the church is an intact 14th century fortified tower house, built largely with reused Roman stone. It is also a reminder of the turbulent Borders history of the 14th, 15th and 16th centuries to which Northumberland’s many bastles and peel towers testify. A short walk from Corbridge’s church leads to the Roman garrison town and fort of Corstopitum an important Roman site to the south of Hadrian’s Wall.

Five miles to the west Hexham Abbey – started in the 7th century by Bishop Wilfrid and sacked by Vikings in the 9th century – stands in the centre of Hexham with its current stunning structure largely a 11th century rebuild. The Abbey, one of the early seats of Christianity in the North, is a fascinating building with a fine collection of items from throughout its history. Hexham is an interesting historical town with its Market Place surrounded by buildings from its medieval past.

Hadrian’s Wall stretches the seventy or so miles from the east to the west coast and marked the northern limit of the Roman Empire. Some of the most prominent sections of the wall and its milecastles are within a thirty minute drive of Ovingham. Roman sites such as Vindolanda, Housesteads and Chesters are open to the public with accompanying museums and cafes. There is much else to see such as the foundations of bridges, a Mithraic temple and quarry. Viewing can be combined with walks across some of England’s most rugged and beautiful landscape. 2022 marks nineteen hundred years of the Roman wall's existence and the Hadrian's Wall 1900 festival will involve a series of public events and exhibitions across the region between January and December (http://theguardian.com/uk-news/2021/dec/31/festival-to-celebrate-hadrians-wall-1900-2022).

The tidal island of Lindisfarne or Holy Island is just over an hour drive from Ovingham where a copy of the famous Lindisfarne Gospels can be viewed. Lindisfarne was, along with Bede’s monastery in Jarrow (20 miles), and Monkwearthmouth in Sunderland (23miles) an important site of Celtic Christianity. Both of these churches and Jarrow’s museum along with Durham cathedral’s collection of illustrated manuscripts from this period are well worth a visit. The Lindisfarne Gospels will be exhibited at Newcastle’s Laing Gallery between September 17 – December 3 2022 (http://Laingartgallery.org.uk/lindisfarne-gospels-2022).The tombs of St Cuthbert and the Venerable Bede are also in Durham Cathedral, a 40 minute drive or short rail journey from Ovingham.

Traces of the early industrial period remain along the Tyne not only in the style and variety of bridges that span the river but in the wagonways that were developed to haul coal from the collieries along the valley. Early steam locomotives were developed for this purpose famously by George Stephenson and William Hedley. George Stephenson was born in Wylam and christened at Ovingham’s parish church. The cottage where he was born is on the waggonway just beyond Wylam. There is a small, but interesting, museum in Wylam library telling the story of the early railways.

Along the Northumberland coast a succession of castles stretch north including the picturesque ruins of Dunstanburgh near the fishing village of Craster and the more substantial remains of Warkworth and Bamburgh. Alnwick Castle with its Harry Potter connection and famous gardens deserves a full day’s visit as does Bamburgh and Berwick with its Elizabethan fortifications still intact.

Inland the houses and grounds of Cragside, Wallington and Belsay are well worth a visit as is Brinkburn Priory and Chillingham Castle. 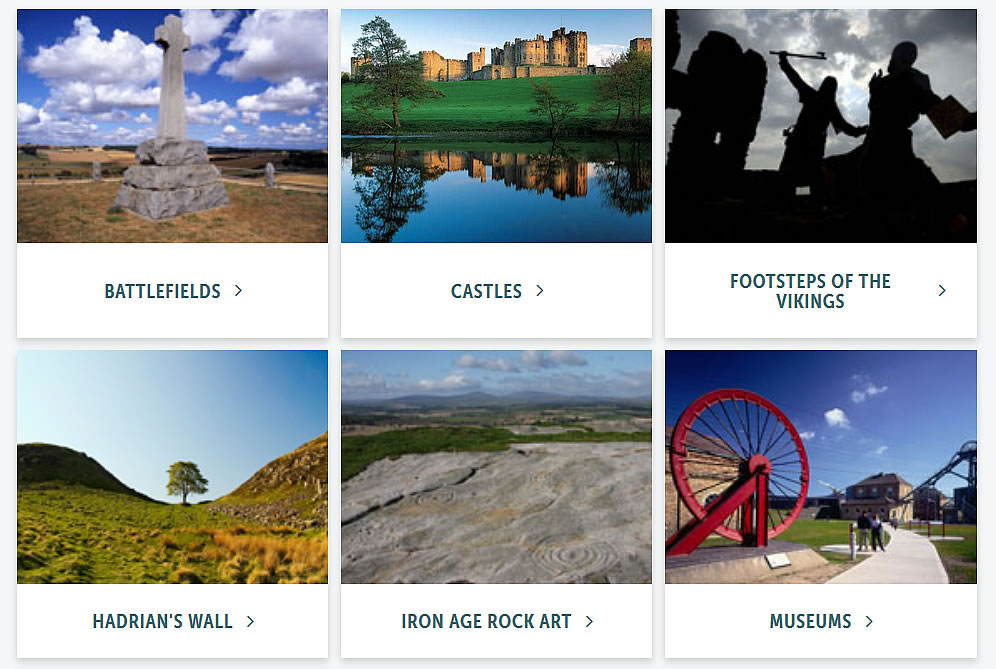